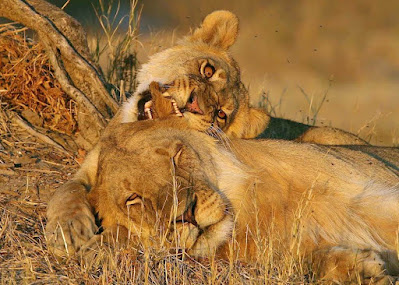 Windhoek – Victoria Falls and back

Before we leave the Etosha National Park today, we take an early morning ride around the Fischerpfanne and back to Fort Namutoni: Breakfast!

Packing, loading and after that to the Klein-Namutoni waterhole – a lap along the Dik-Dik path and off we go towards the Okavango River.

<<< "Kitties" close to the "Aroe" waterhole, north of the "Fischerpfanne". 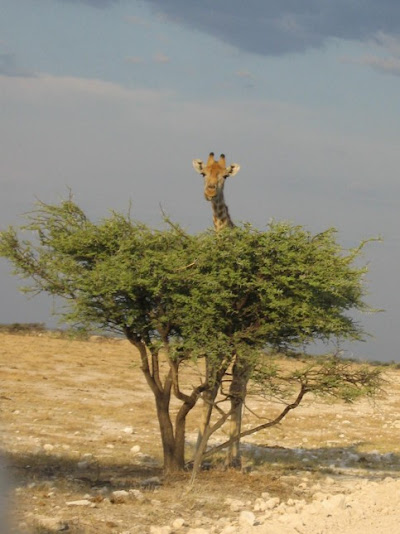 <<< "Good hiding place???" Between Fort Namutoni and Twee Palms, east of the "Fischerpfanne".

We leave the national park through the "Von Lindequist Gate (also Namutoni Gate)", and from there we have to drive about 315km up to Rundu and then another twenty kilometres to the NKWAZI LODGE, which is located directly on the banks of the Okavango, which here forms the border between Namibia and Angola.

We calculate with just under four hours for the pure driving time (without breaks) and can therefore afford the time to look around the national park again after breakfast.

On the way to the mining town of TSUMEB, we pass the only two natural lakes in Namibia.
LAKE GUINAS is with its 140 × 70 metres water surface and a depth of about 132 metres, the largest lake in Namibia that is constantly filled with water. This karst lake near the Guinas farm is considered as to be a twin lake of Lake Otjikotos 15 kilometres (bee-line).

However, the assumption that both lakes are connected by an as yet unexplored underground water system has thus far not been proven..

Lake Guinas was previously used to supply water to the nearby mining town of Tsumeb by means of a then still existing steam pumping station. Among other things, the originally endemic cichlid species “Tilapia guinasana” occurs in Lake Guinea.

Like Lake Guinas, LAKE OTJIKOTO is a naturally formed karst lake and thus the second of only two lakes in Namibia that are constantly filled with water. Charles John Anderssen and Francis Galton were the first Europeans to reach this lake in 1851. With a size of 100 × 150 metres, its water surface is slightly smaller than that of Lake Guinas. However, its depth has only been explored down to around 76 metres, and much of it is still in the dark - especially the transition from the water-filled sinkhole to the suspected system of underground watercourses. Some researchers think this system could reach up to well under the western part of the Etosha Pan. Some other researchers even suspect that there could also be a connection to the Dragon's Breath Cave, more than fifty kilometres south-east of Lake Otjikoto.

Because hobby divers sometimes had fatal accidents in Lake Otjikoto during privately organized “research dive sessions”, now diving there is only permitted with official permits.

Shortly before their surrender, the German Schutztruppe sank weapons and ammunition in this lake in 1915 so that they would not be left to the enemy.

Here again impressions from our side trip to the Klein-Namutoni waterhole and the lap around the Dik-Dik Drive.

Our route from Fort Namutoni to the Nkwazi Lodge and on to the Ndhovu Safari Lodge. 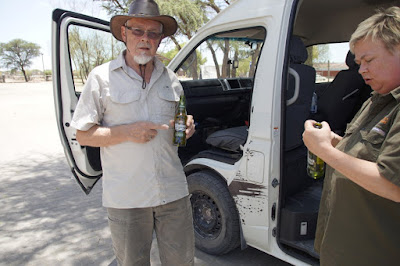 Along the route between Tsumeb and Grootfontein, we unfortunately had not enough time to make a detour to the Hoba meteorite. It happened because we just preferred to use this time to do a few more laps within the Etosha National Park.

<<< Short break at the Mururani checkpoint.

In Rundu a few more errands and then it goes straight to the NKWAZI LODGE, directly on the Okavango. When approaching our chalets, I made a mistake on the driveway and turned a sand path too early. To the great fun of the kitchen staff and with their active assistance, the manager had to pull me backwards with his tractor out of the sand hole into which I had slipped. With a vehicle that has neither all-wheel drive nor a differential lock, you should act very carefully in the fine flour sand if you get stuck. In the best case, you won't get free, in the worst case, you just dig yourself deeper into the sand. 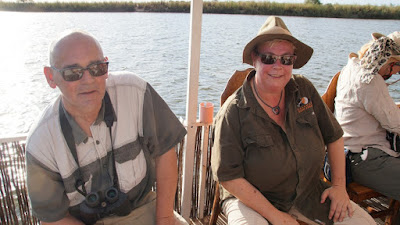 Later in the afternoon, we went on a boat tour along the Okavango – and a short stopover with snacks and drinks on the Angola side of the river. Not really completely legal - but where could we have gone big without having a vehicle on the other side of the river.

As if coming out of nowhere, a small group of local "striplings" appeared there, who (of course) offered a lot of really funny homemade souvenirs for sale. Then it's back to the lodge - and behind us a magnificent sunset over the river and savannah. 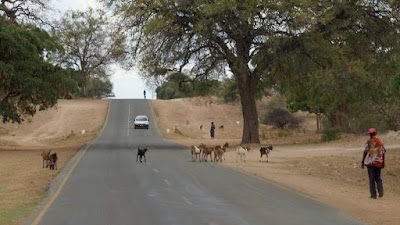 We don't have that far today. So we can start the day comfortably. Round about 190km along the Okavango eastward to Bagani and from there another twenty kilometers southwards to just before the Mahango game reserve, which is part of the Bwabwata National Park.

The NDHOVU SAFARI LODGE is also located directly on the Okavango. But her it no longer forms the border with Angola. The opposite bank also belongs to Namibia (Caprivi Strip) and is also part of the Bwabwata National Park. Of course, on Monday, November 18th, we arrived

<<< We pass through the small village of Bagani 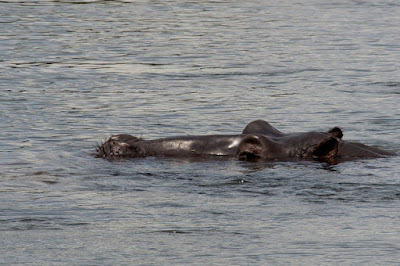 <<< In front of our veranda: hippos wait for the sunset to go to the river meadows to graze when it gets dark.

at the Ndhovu Safari Lodge soon enough to do a lot more: :
- A tour in our own vehicle through the Mahango Game Reserve, ...
- ... a boat trip over the Okavango - along the banks of the Bwabwata National Park...
- ... relax in comfort at the "pool", ...
- ... and then of course a wonderful dinner, before we go over to the “cozy part” of the evening around the campfire. But more about that in the next section of the travel description.