Windhoek – Victoria Falls and back
PART 2 – from Waterberg into the Etosha National Park
Early in the morning - after breakfast - quickly into the pool and to the military cemetery, where the fallen of the Battle of Waterberg, in 1904, are commemorated - both German and Herero warriors. But after that we finally start - via Otjiwarongo - Outjo - Andersson Gate - into the Etosha National Park!
Otjiwarongo probably existed since long as a place for settlement place and it's name in Otjiherero language means "the beautiful place of the fat cattle".
Under German rule, the city was founded in 1892 and from 1900 onwards white settlers moved to places where before only a few Herero, Damara, Nama and Topnaar had previously lived.
In 1906 Julius Doll opened the first shop and connected Otjiwarongo to the Otavi Railway network. The old Henschel locomotive is still an industrial monument in front of the train station.
The colloquial language is predominantly Afrikaans (around 90%) and German is also understood by around 35% of the residents. Languages within the ethnic group are of course also spoken, such as Khokhoewogab (a collective term for various dialects of Nama language family), Otjiherero and Oshivambo.
Also of interest in this context is the history of the Damara people, who are actually Bantus and most likely were part of the Herero peoples a long time ago. At some point they were captured by Namas and had to serve them as slaves over centuries. During this period, which only ended with the beginning of German colonial rule, the Damaras adopted the language and culture of the Namas and other Khoin peoples.
Two other important institutions in Otjiwarongo and the surrounding area should also be mentioned: The crocodile farm, directly in the village and about 45 kilometers to the east, almost on the western steep slope of the Waterberg: The information, research and training centre of the international "Cheetah Conservation Fund".
This facility is part of a worldwide network of national parks, wildlife and nature reserves, zoological gardens, universities and various private institutions for the protection and conservation of the cheetah, the existence of which is threatened worldwide by various factors. On the one hand, there is the genetic bottleneck, which was created about thirty-five thousand years ago, when the entire genus, except for a few specimens of the subgenus "Acinonyx jubatus", died out. Since then the American and European cheetahs have disappeared and the cause of this mass extinction is still largely in the dark.
Since then, cheetahs have been found in the wild only in Africa and within a few isolated populations in Asia. Other problems are the loss of habitat and the associated fragmentation of natural occurrence. Inbreeding naturally has a further effect on the “genetic bottleneck” mentioned above.
That's why this worldwide network is so important for the maintenance and - as far as possible - even the improvement of the genetic reservoir. Unfortunately, today, we on our way havened had time for neither one. Not for the "Otjiwarongo Crocodile Farm" nor the "Cheetah Conservation Centre". We want to continue towards Etosha.

We did not make any detours today because we could not book for the first night in Okaukuejo (pronounced "okokuju") and therefore had to drive annother seventy kilometers to Halali.
In Outjo we stock up on "Braaivleis" - that means the meat for barbecue, and the drinks for tonight. Finally we reached  Andersson Gate, the southern access to the Etosha National Park.
Here we fill in the forms for the national park permit, get it stamped and submit the reservations for our accommodation. We will have three overnight stays inside the park - twice in Halali and once in the old German Fort Namutoni. I could easily and comfortably spend three weeks in Etosha National Park without getting bored.
But still: We really have a lot to experience and even more routes ahead of us on this tour, so we must limit ourselves to these three overnight stays.
At the turn of the 19th to the 20th century, the game stocks in the north of the then "German Southwest Africa Protectorate" were so decimated by excessive hunting that there were already bottlenecks in the
meat supply of the local population.
This affected particularly Damaras and Ovambos, who depended much more on hunting than the settlers. Probably also because their meat growth in cattle farming was far below that of the commercial - mostly white - farmers. An additional factor was that their livestock, suffered greatly from the widespread foot-and-mouth disease.
In March 1907, Governor Friedrich von Lindequist put an area of almost one hundred thousand square kilometers as a nature and wildlife reserve under the protection of the government. The nature reserve was then more than four times as large as it is today.
Since around 1880 there had been no elephants in the area and the herds of antelopes, buffalos etc., which used to count ten thousand animals, had practically disappeared. The protective measures were successful and led to a gradual regeneration of the game populations. At the same time, however, the land requirements of the local population and the settlers grew.
In the course of the following years, the game reserve was reduced again in several stages and is now bigger than the size of Wales. However, since the turn of the last century, efforts have been made to connect the game reserves and biosphere reserves, as well as national parks, to form large protection zones across borders. The Etosha National Park is also the subject of such considerations. 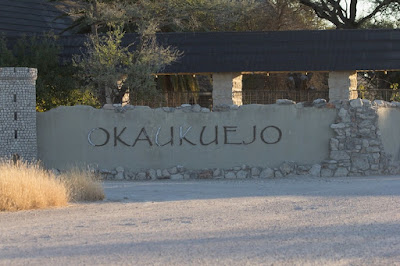 At the Okaukuejo Camp we get the permits and pay the national park fees. At the NWR counter / Namibian Wildlife Resorts, we present our bookings for the next three nights. Of course, we paid for that well in advance.
"Cold drinks" and beer - a quick refreshment at the pool - a walk to the viewpoint at the Okaukuejo waterhole - a climbe-up to the lookout tower and then it goes on. We want to look east of the Etosha pans towards Okondeka and then past Okaukuejo towards Halali. We decide about the route we choose depending on what is to see there and what time it is - because: In any case, we have to be at the camp before dark and of course the reception should also be still open.
And really: there was so much to see that we already ran out of time on the first day in the national park ... - but see for yourself ... and that's just a very, very small section.
After a short rest at one of the viewpoints on the banks of the salt pan, we continue towards the Halali camp, where we will spend the night twice. We arrived just in time to collect our keys at the reception and to move into our chalets in daylight.

Later in the evening - when it was already dark we went to the Halali waterhole. A peculiarity, by the way. It is below a small hill from which you have a really good overview. However, you need good eyes and above all good hearing, because the surrounding bush is quite dense.